These are the first things that come to my mind when  I think about the Fourth of July. While the first three are all good fun, hot dogs can put a damper on your holiday without you even realizing it. In fact, some health experts claim that regularly eating hot dogs can be as harmful to your health as smoking cigarettes! Susan Levin, a nutrition education director, says that “Processed meats like hot dogs can increase your risk for diabetes, heart disease, and various types of cancer. Like cigarettes, hot dogs should come with a warning label that helps consumers understand the health risk.”

During the upcoming Fourth of July holiday, Americans will eat over 150 million hot dogs, which is enough to stretch from Washington D.C. to California over five times. ESPN will be hosting their annual hot dog eating contest, to see who can stuff the largest amount of hot dogs into their mouths within a certain amount of time. I don’t know about you, but I’ve never understood why a hot dog eating contest is featured on a sports channel, the same channel that features the most in shape athletes in the world. But its the Fourth of July, and this is America after all, so I guess ESPN is free to show us people cramming their mouths full of saturated fat, sodium, and preservatives.

Lets look at the ingredients lists of the 4 most popular brands of hot dogs: 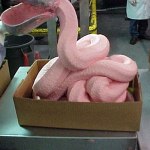 The very first ingredient of “Mechanically Separated” should raise a red flag. In the process of mechanically separating meat, machines scrape the bones 100% clean of meat by passing leftover bones from the initial cutting through a high pressure sieve. This paste goes on to become the main ingredient in the majority of hot dogs.

The Sodium Nitrite listed on the ingredients list is a preservative used to expel bacteria from meat that can cause botulism. However, this chemical can have a carcinogenic side effect and cause cancer in young children and pregnant women. This is also why your hot dog has a pink/red color. Without it, the hot dog would be grey. Much less appetizing if you ask me!

While these ingredients appear better, and are for the most part, the “cultured corn sugar” and “celery juice” stand out. Cultured corn syrup is really just another name for high fructose corn syrup, which we know to be an ingredient that is best avoided. The celery juice is included to replace the nitrites, which is a better alternative yet not ideal.

Link for Link: 1 frank has 170 calories and 6 grams of saturated fat ( twice as much as the first option)

This list of ingredients is much easier to understand. However, the word “Natural” in the name should be read with discretion. The USDA sets an unclear definition for “natural” only limiting it to being “minimally processed.” So far, this is the better quality hot dog out of the bunch.

Link for Link: 1 frank has 70 calories and only 2.5 grams of saturated fat

If these facts encouraged you to try an alternative tasty treat this Fourth of July, check out these ideas:

1. Chicken Dogs: Marinate chicken tenders in light Italian dressing for 2 hours or overnight. Grill them until done and serve on whole wheat buns topped with honey mustard. Each one has less than 1/4 of the fat content of hot dogs, none of the saturated fat, and less than half the sodium!

2. Meatless Dogs: Go meatless! Top a hot dog bun with 1/4 cup of coleslaw and 1/2 cup baked beans for a sweet and savory combination that actually provides more protein than a traditional dog, as well as fiber!

3. Chicken or Turkey Sausage: More protein and meat than a traditional hot dog (3 ounces vs 1.5 ounces) and the fat content is lower too! Top it with grilled fruit for a zingy taste (try grilled pineapple salsa).

4. Seafood Dog: Make a shrimp roll instead! Peel and devein shrimp and toss into a bowl with a drizzle of olive oil. Sprinkle salt and pepper. Grill until done and let it cool. Remove tails and mix with some nonfat plain Greek yogurt (about 1/4 cup of yogurt per 2 pounds of shrimp), a splash of lemon juice, chopped celery, and chopped chives. Serve with crisp lettuce on a hot dog bun. Fat content is well under half that of a traditional hot dog!